By SV Entreprenuer - November 21, 2011
I'm very excited for the upcoming Big Ideas Fest!  Big Ideas Fest is a unique three-day immersion into collaboration and design with a focus on modeling cutting-edge thinking in  K-20 education.  There is a great speaker line up from educators in grade schools, Deans from top universities, the Under Secretary of the U.S. Department of education, and other great designers and leaders in the education sector.  It should be a great conference December 4-7th, 2011 at the Half Moon Bay Ritz Carlton.  If you haven't registered yet, here is your chance!  Register before it is too late and collaborate with top designers and movers and shakers in the education sector.  Let's shake things up and change the world!
bif2011 big ideas fest big ideas fest 2011

Popular posts from this blog

By SV Entreprenuer - November 21, 2008
I have a theory. I have a theory that people with the personality type of ENFP (Myers-Briggs Extroverted-Intuition-Feeling-Perceiving) are likely to be seen as people with ADHD. For some background, ADD is a sub-group of ADHD, so people with ADD have ADHD, although the people with ADD aren't hyper-active. (Yes, I know it's a but confusing, but that's how it was explained to me) I read somewhere that only 1-2% of the population are ENFP's. It's funny, because when I meet an ENFP, I know they are an ENFP, it is an indescribable bond of likeness that is formed. So, If I am correct and most ENFP's display the symptoms of ADHD, does that mean that ADHD is really a 'disorder', or merely a personality difference of those who categorized the ENFPs as having ADHD? Could it be that we have a different learning style than most, so have been bored by conventional schooling of the average school teacher who tends to be of the same personality type? The botto
Read more 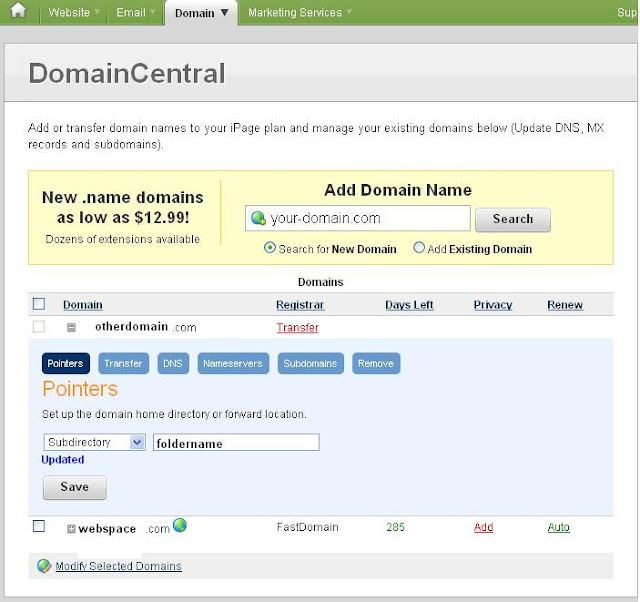 How to install 2 Wordpress sites on one server, and use your space for multiple domain names, cleanly. (Between 1and1.com and ipage).  Where you have the domain name registered with 1and1.com and web hosting with ipage. Steps: Go to the control panel, under Domain, click on "Domain Central".  Click "Add Existing Domain".  Type in the domain that you own through 1and1.com and click "Add". In a matter of seconds, iPage creates a folder within your public_html directory that’s on your server and writes a script that points that domain to your new domain’s folder. This may or may not be needed before the next step.... FTP to your site using FireFTP a Firefox Add-on, or any other FTP client Create a new subfolder in your root directory for your wordpress files to be placed into Advanced:  Instead of creating the folders in the Home Directory, select "Subdirectory" and type a folder name.  This will make it so you can host many pages sea
Read more

How to Set Up a Targeted Craigslist RSS feed with Pictures

If you are looking for something specific on Craigslist, specifically something as crucial as finding housing, you may spend way too much time refreshing Craigslist and re-reading the same posts over and over again. But, there is a better way! First of all, when doing a housing search, Craigslist usually gives you a couple of different tabs to select from within your area.  These tabs may not limit your search enough for you, especially if you are looking for only particular cities within a tab. Here's a hint.  Inside of the search box... type the cities you are searching for, for example: (mountain view)|(palo alto) The parenthesis will group the search term you are looking for, and the "|" is the symbol for 'or'. Now, after you perform the search, if you scroll all the way to the bottom of your search results you'll see this symbol.  Click the orange RSS and you'll get let to a webpage with a bunch of text. Ignore the scary code and copy the
Read more